They may be complete unknowns in the UK, but these secret British celebrities who have found fame overseas are mobbed by fans in China, France and Pakistan.

Celebrity Darren Tulett, from West Sussex, Tanya Wells, from Wandsworth and Ian Inglis from Carfiff all got their shot to fame after leaving the UK, building successful careers in entertainment.

Darren, 55, is a renowned sports presenter in Paris, while Tanya, 33, and her husband are revered for their spiritual music and Ian, 43, rose to fame after reaching the semi-finals of China’s Got Talent in 2012.

The stars are mobbed by fans abroad, but in the UK, no one bats an eyelid when they walked by.

Here, they reveal what it’s like to find fame abroad.

Darren Tulett, 55, pictured, from West Sussex, found fame as a sports presenter in Paris after moving to to France in 1988

When Darren first moved to Paris with a friend as a 23-year-old politics and social science student looking for adventure, he felt excited simply to land a job teaching English.

Growing up in a council house in Lancing, West Sussex, his move to Manchester Metropolitan University, aged 20, had seemed adventurous.

While he remains equally inconspicuous back in Blighty, dubbed ‘Darren d’Angleterre,’ in France he is a famous TV personality, loved for his fun and quirky approach to sports presenting.

He said: ‘When I came to Paris, I had no idea how long I’d stay and no plan. I’d always wanted to get into journalism, but that wasn’t my intention when I arrived without a word of French.’

He said: ‘I was under strict instruction not to speak French in the classroom, which suited me because I didn’t know any. 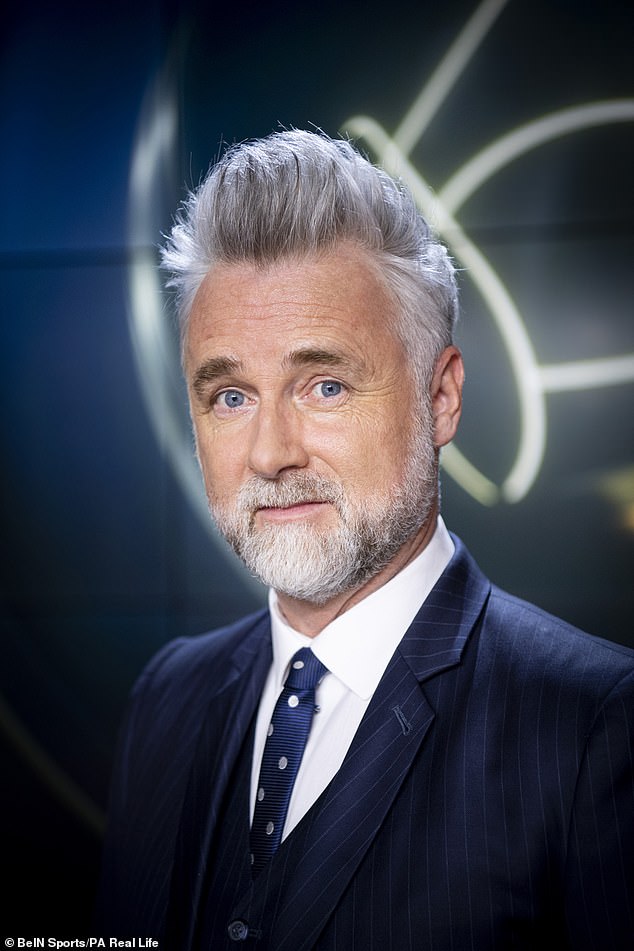 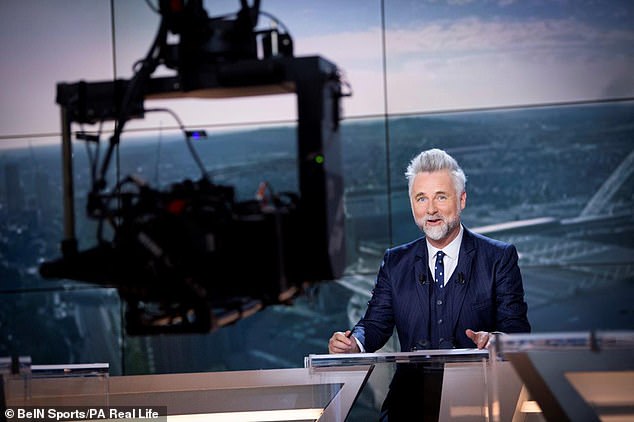 Now Darren presents the French equivalent of Match of the Day, which is watched by millions of football fans in France

‘I started dating a French girl and we were sat in a jazz club one night when she said something to me I didn’t understand. All I could make out was “fini”.

‘I remember saying, “No fini. The club is open until 2”. It took me 10 minutes to realise she was dumping me.

‘But not long after, I met a French woman who would become my wife and teach me the language.’

After that, Darren brushed up on his French and, after briefly returning to the UK to join Bloomberg News, he came back to Paris in 1998 to cover the World Cup – and stayed.

He said: ‘I joined Canal+ in 2002, which is basically France’s version of Sky, and 10 years later I moved to BeIN Sports.’ 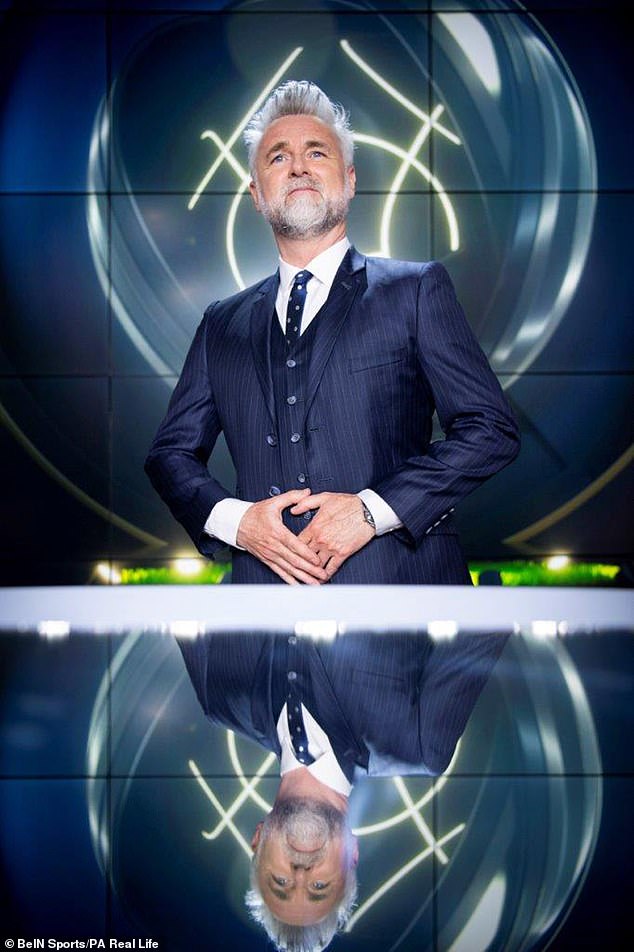 While he is a well-liked sports TV personality in France, Darren, pictured, barely gets any attention when he visits back home in the UK

At BeIN Sports, which has 55 million subscribers, Darren hosts a national TV programme, Champions Arena – the equivalent of Match of the Day – which broadcasts every Saturday.

‘It’s still a bit odd when people recognise me in the street,’ he said. ‘I’ll notice someone giving me a funny look, then they’ll come up to ask for a photo.

‘My mum finds it amusing when she visits.

‘I didn’t move to Paris in search of a TV career, but I think part of what helped me was that, rather than being held back by being English, I leaned into it – although my French is a lot better these days.

‘It’s mad really that 30 years later I’m still in France – and so is Nick, the mate I came with.’

‘Considering I didn’t know any French – I now have two bilingual daughters!’ 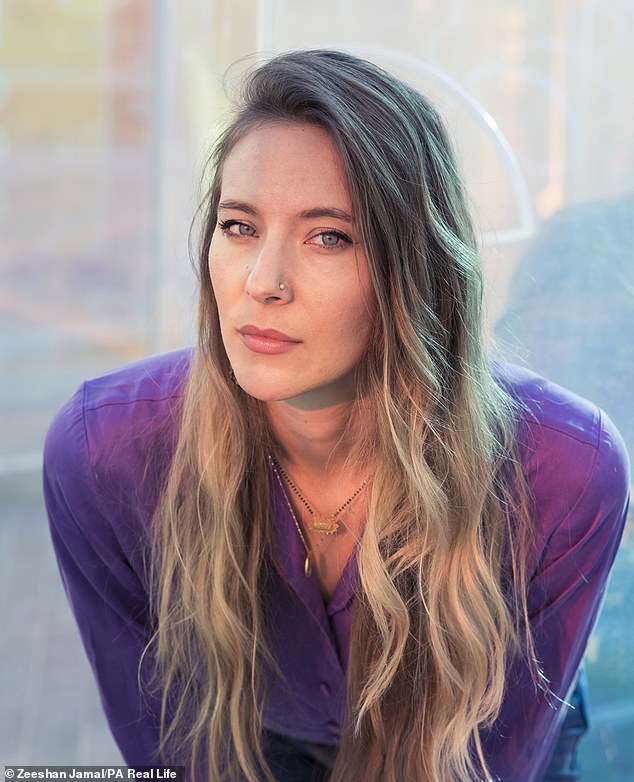 Tanya Wells, 33, from Wandsworth, is unknown in the UK but has a successful career as a singer in Pakistan 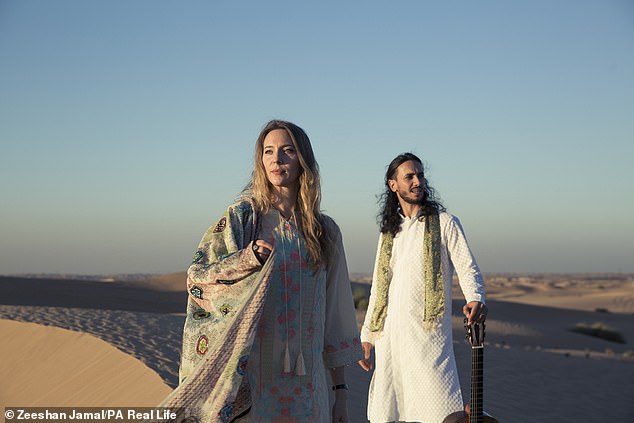 Tanya performs spiritual music with her Brazilian husband Paulo Vinicius, 36, right, with whom she’s formed the band Seven Eyes in 2015

When she visits her family in Wandsworth, south west London, no one bats an eyelid, but 3,785 miles away in Pakistan, Tanya Wells, 33, is a head-turning singing sensation.

Performing spiritual music with her Brazilian husband, Paulo Vinicius, 36, in their band Seven Eyes, formed in 2015, both big exponents of diversity who love mixing-up cultural influences, they also enjoy singing in different languages.

They still remain unknown in Britain, Brazil and Geneva in Switzerland where they live – inspired by Tanya’s Swiss mum, who sent her daughter to school in India for a while to broaden her experience.

But suddenly, two years after uploading one of their songs in Urdu – the official language of Pakistan – it unexpectedly went viral, making them overnight stars in the South Asian country. 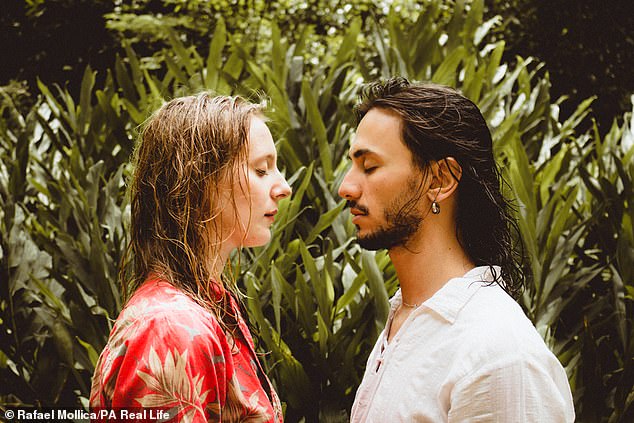 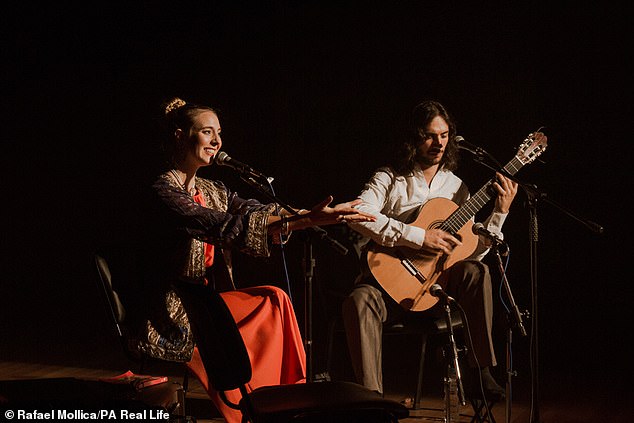 The couple, pictured during a performance, find their celebrity in Pakistan strange. Tanya admitted she is sometimes recognised by Pakistani people in London 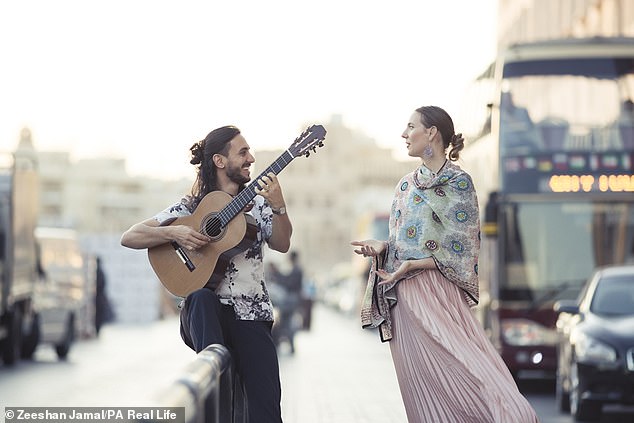 Tanya, pictured with Paulo, admitted her family in London were flummoxed by her fame in Pakistan

Tanya, whose Urdu music has racked up 7.5 million YouTube views, said: ‘I didn’t think anything of it after we uploaded it. I had attended school in India as a child and Paulo is from Brazil, so we often perform in different languages.

‘The intention was never to become famous. The song was on the internet for two years before, one day, in 2017 it just went viral. I have no idea how it happened, but people in Pakistan started taking notice.

‘It was an older song – a famous “Ghazal”, written by a seminal Pakistani poet Faiz Ahmed Faiz – that I had covered in Urdu.

‘Suddenly, we had this huge fanbase there.’

Travelling to Pakistan in 2017 for a concert, Tanya was stunned when 1,000 people turned up just to watch her sound check.

She said: ‘That was our first taste of real fame. It’s bizarre, but the country just connected with our performances. I think they appreciate the fact that we’re Westerners paying respect to their heritage and music. 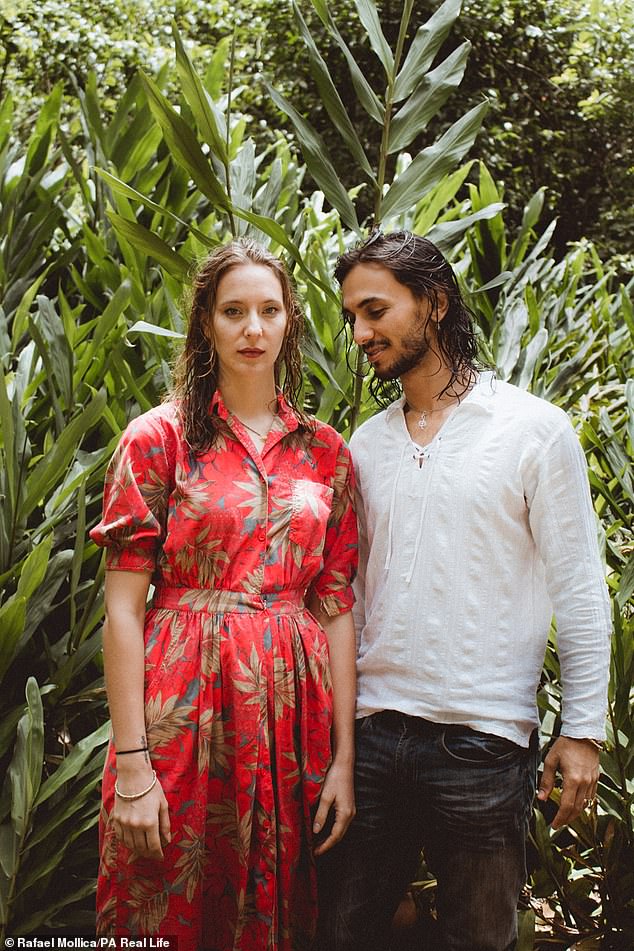 Tanya, pictured, recounted how stunned she was when 1,000 people turned up to listen to her sound check during a concert in Pakistan in 2017 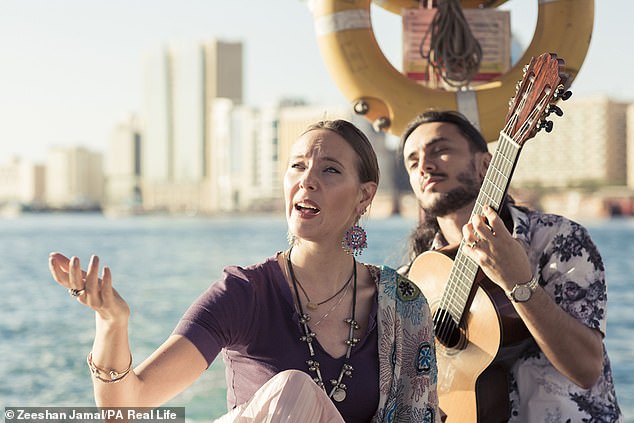 Tanya, pictured with Paulo, said she was looking forward to travelling back to Pakistan to see her fans. She currently resides in Switzerland

‘My schooling means our band was inspired by Indian music, but we’ve evolved it to include other cultures too.’

Tanya admits that her accidental fame leaves her loved ones back in London flummoxed.

She said: ‘My family think it’s really random and probably bizarre. They’re not wrong! I’ve been recognised in Pakistan by festival goers but when I visited, I didn’t have chance go out on the street.

‘Bizarrely though, when I’m home in London I’ll get stopped by British Pakistani people who recognise me.

‘There have been several occasions when my sister has been in a taxi and the conversation of music has come up and they find out I’m her sister. The drivers get so happy that they give her a free trip!

‘I’ve always loved music and want to use it to connect with people, so I love it that the Pakistani people have accepted us.

‘I’m really looking forward to going back there after the pandemic and playing to our fans again.’ 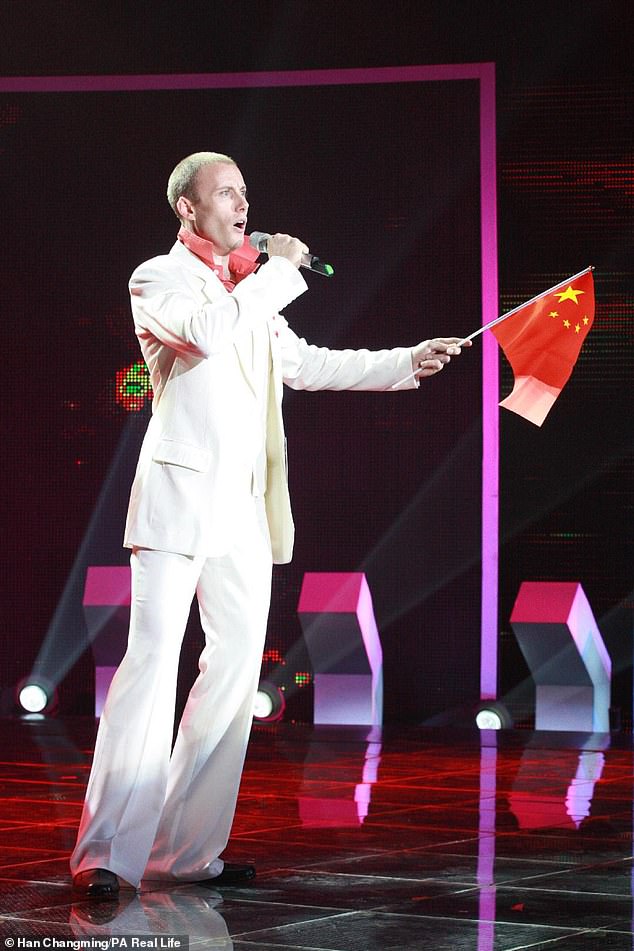 Welshman Ian Inglis was propelled to fame after appearing on China’s Got Talent in 2012, where he sang Communist anthem while waving a China flag, pictured

In a distant corner of the world, 5,000 miles from his Cardiff homeland, Welshman Ian Inglis, 43, was propelled to overnight fame after reaching the semi-finals of the 2012 China’s Got Talent competition.

He only auditioned for the reality TV show as a joke, but soon found himself being mobbed by enthusiastic fans while doing his weekly shop.

Moving to Japan in 2002 to become an English teacher, Iain met his wife, Yu Yanling, now 36, and moved with her back to her home country of China in 2004.

He said: ‘For the first 18 months here, my Chinese didn’t improve at all.

‘I wanted to see the real China and It was only when I left the modern comforts of Shanghai in 2007 and moved to Sanya, in the Hainan Province, and began work in a guest-relations role in a hotel, that my command of Chinese took off.

‘I entered the show for a bit of a laugh, but couldn’t believe the reaction I got. I think people liked the fact that I was a foreigner singing traditional Chinese songs.’

‘The older generation particularly loved the act,’ he said. ‘I think it was nostalgic for them.’

His novelty performances made Iain a wild card favourite and he made it all the way through to the semi-finals before being axed. 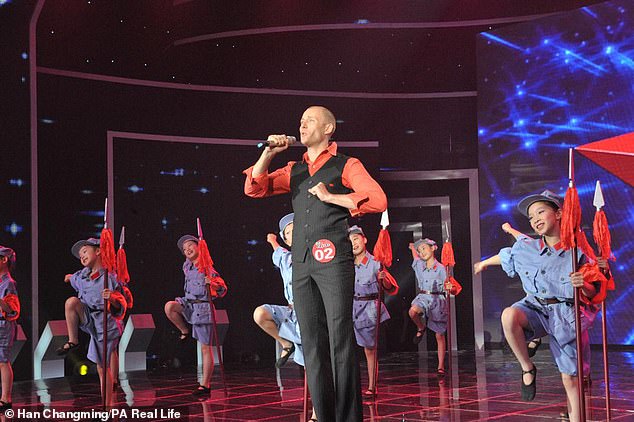 Ian’s career took off after the show, pictured, with tours across the country. He now hosts a weekly prime time travel and tourism programme which is broadcast nationally in China

He said: ‘It was a bit crazy after the show. I started touring, performing my songs across the country and whenever I travelled through a big city, I was constantly getting recognised.

‘Even at the supermarket, fans would mob me. It was a strange experience. Luckily, life is a lot quieter now.’

But, far from sinking back into obscurity, his reality TV fame gave him a high profile and Iain now hosts a weekly prime time travel and tourism programme broadcast nationally across China.

A household name in China, when In 2019, Iain, his wife and their six-month-old daughter went to Cardiff to visit family, he walked down the street without anyone noticing him.

He said: ‘My family and friends thought my appearance on China’s Got Talent was hilarious. I can’t sing but I gave it a good go.

‘I still give performances occasionally when asked, but I’m happy in my new role now as a presenter.

‘I kind of fell into this career and I’m not sure what I’d be doing now if I was still in the UK. I certainly don’t think I’d have become famous.’

She said: ‘To forge a successful career in the public eye is difficult enough in the safety of your own country, but to do so in an unfamiliar language and culture is a different challenge altogether.

‘If you saw these people standing at a bar in London you might not give them a second thought, but in France, Pakistan or China, they’d be swamped by adoring fans.’